The Church is Visible

How does one find an invisible man?

In our previous message, we met Joe, a fictional man seeking the Church begun by Jesus. He wants to be part of the family of faith described in the New Testament. But such a quest assumes that the Church is actually a visible and identifiable group of people. This was the way that the Church was understood by Christians for the first fifteen centuries of Christianity: a visible family with members, leaders, teachings, and worship that can be clearly recognized.

In recent centuries, there arose a different view of the Church.

When new churches were begun in the sixteenth century by the Protestant reformers, each with their own teachings and ways of worship, visible unity no longer seemed possible. It was proposed that the Church is actually an invisible union of all who believe in Jesus, regardless of religious affiliation. Thus, only God can identify the Church and its members, because only God can see into our hearts. If this is true, then Joe’s search for the Church started by Jesus would be impossible, as hopeless as finding an invisible man. But is this what Jesus intended?

When Jesus spoke about the Church, he used images such as the light of the world, a flock of sheep led by a shepherd, and a city set on a hilltop that cannot be hidden. Such images show that Jesus intended his Church to be visible and recognizable. His followers are to be united in his truth, reflecting the unity he shares with the Father. (John 17:21) Jesus gave his apostles authority and sent them out to continue his ministry until he returns in glory. (Matt 28:18-20)

In the New Testament, the Church can be clearly identified.

The Church could be recognized by its teachings, which were the same everywhere. (Eph 4:4-6) It could be recognized by its worship, which centered around the celebration of the Lord’s Supper. (1 Cor 11) The Church could also be identified by its leaders, who taught and led with authority received from Jesus. We see this authoritative leadership throughout the Acts of the Apostles, and especially during the important theological deliberations of Acts 15.

The Church is the visible body of Christ.

One of Paul’s favorite images for the Church is “the body of Christ.” (1 Cor 12) By its very definition, a body is the physical aspect of us that is visible to others. Our visible bodies manifest our invisible souls. It is only because of your body, for example, that your soul can communicate and act in the world. Christians are indeed united spiritually in the Holy Spirit, but they are also meant to be united in a visible family of faith. In order to faithfully teach as Jesus taught and serve as he served, the Church needs to be visible, just as the Lord’s body was visible to his contemporaries.

We should expect the Church to still be recognizable today. 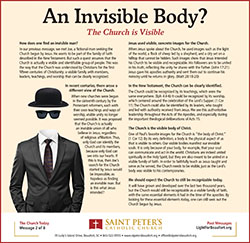