Yes, Catholics are Christians. Catholics believe what has always been at the core of the Christian faith: that Jesus of Nazareth is divine. God loves us so much that he entered the world and became a human being, in order that we may know him and love him. Since this is the case, we want to make Jesus the center of our lives. In him alone is found true joy and peace in this life, and eternal salvation after death.

Why do you call yourselves “Catholic”?

“Catholic” comes from the Greek word meaning “universal” or “shared by all.” By the end of the first century, this word started to be used by Christians to refer to the worldwide Christian Church, founded by Jesus and built upon the apostles. For the rest of the first millennium, the terms “Christian” and “Catholic” were used interchangeably.

Why are there many different Christian groups?

The first long-lasting division among Christians happened in 1054, when separation occurred between the Catholic Church and the churches we now know as the Eastern Orthodox. The next significant division occurred in the 1500s with the Protestant Reformation, when various new churches separated from the Catholic Church. As disagreements in doctrine or practice arose, these Protestant churches have continued to split over time, leading to the hundreds of different denominations one finds today.

What do all Christians have in common?

Although there are important differences, there is a great deal that most Christians share in common. We share a belief in the true humanity and true divinity of Jesus. We believe in the Holy Trinity: God the Father, God the Son, and God the Holy Spirit. We share the same New Testament, as well as the Ten Commandments and much of our moral code. Catholics see other Christians as our brothers and sisters in Christ, and there are many opportunities for us to work together to serve those in need and share the good news of Jesus.

What are differences between Catholics and Orthodox?

The Orthodox churches are extremely close in doctrine and worship to the Catholic Church. For example, they have bishops and priests, celebrate sacred liturgy, and believe that Jesus is truly present in Holy Communion. From our perspective, the main difference is that their bishops do not accept the leadership of the pope; each bishop is essentially the pope of his geographical area.

What are differences between Catholics and Protestants?

There are various differences in belief and practice, many of which we will explore in this message series. From our perspective, the biggest difference is that Catholics believe that Jesus created a family of faith, the Church. Through this family of faith, Jesus intended to continue his ministry until the end of time. He continues to teach us, nourish us, and guide us in every generation. Since we love Jesus, we want to be part of this family and receive all the gifts he intended for us! We are Catholic because we believe that the Catholic Church is this spiritual family begun by Jesus. 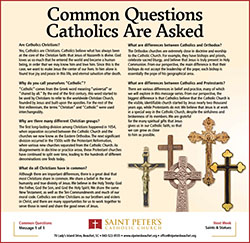