From a worldly perspective, Jesus was of no importance.

He grew up in a small village, a lowly person in an unimportant corner of the Roman Empire. He had no earthly wealth, no military power. He was arrested and condemned to an agonizing and shameful death. In his moment of need, he was abandoned by his friends. In almost every way, Jesus had nothing that the world would associate with success or greatness.

Yet, Jesus changed the course of human history.

Two thousand years after his birth, a third of the world’s population follow Jesus as Christians. His followers laid the foundation for western civilization. It is thanks to Jesus and his followers that we have universities, hospitals, and many other institutions we take for granted, as well as principles like the dignity of the human person. We even divide history by the years before and after his birth.

What makes Jesus of Nazareth so important?

In popular culture, we often imagine Jesus as simply a loving teacher who went around telling everyone to be nice and to love each other. But as one reads the Gospels, the four biographies of his life, one discovers a very mysterious and complex individual. At every turn, he speaks and acts in ways that are completely unexpected and fascinating.

Jesus responded to the needs of the human heart.

He taught the crowds as no one had ever taught before. He called his listeners to turn away from sin and seek God. He revealed that God loves us as a heavenly Father, and he demonstrated this merciful love in his attitude toward sinners and the marginalized. He forgave the sins of those who repented. With merely a word or gesture, he worked countless miracles, healing the sick, casting out demons, and even raising the dead!

By his words and actions, he claimed to be God.

Jesus did not walk around shouting, “I am God!” Such an approach would have led to immediate rejection from his Jewish listeners. Instead, Jesus gradually revealed his identity in his actions, and through riddles and parables, so that those who were able could slowly begin to have faith. He revealed his identity most clearly in his suffering on the cross and through his resurrection from the dead.

In this series, we will discover what makes Jesus unique.

We will explore the Gospels and try to look at Jesus through the eyes of his Jewish contemporaries. We will see why Jesus touched the hearts of so many people, why great crowds flocked to him. In so doing, we will begin to see why Jesus is still so important to us today. 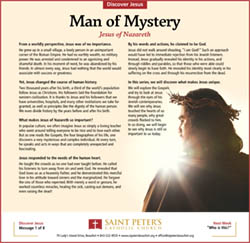