Out of His Mind?

Jesus Was No Lunatic

What if Jesus believed he was God, but he actually wasn’t?

As one reads the words and deeds of Jesus in the Gospels, one sees that he claims to be God. One possibility is that Jesus truly believed that this was the case, but he was mistaken. In other words, he was delusional or crazy, like someone today who believes himself to be from outer space. But such an explanation does not fit the evidence one finds in the Gospels.

He does not exhibit typical signs of mental disorder. He does not act or speak irrationally, jumping to false conclusions or exhibiting paranoia. Jesus acts logically and with a clear sense of purpose. His teaching is clear, down-to-earth, and cuts right to the heart of his listeners. Men and women of all backgrounds are attracted by his message, both then and now. His words are not those of a madman.

Jesus was emotionally balanced and stable.

Those who are mentally disturbed are often unable to display emotion appropriately, but this is not the case with Jesus. He weeps when his friend Lazarus dies. (John 11:35) He displays appropriate anger when he sees God’s temple in Jerusalem being misused by merchants.
(Matthew 21:12) He demonstrates tremendous calm and self-control, even forgiving his executioners as he is dying. (Luke 23:34)

Jesus had healthy friendships and interactions with others.

Those who are disconnected from reality do not typically interact well with others or form healthy, long-lasting relationships. An insane person might deceive others for a short time, but those around him or her will soon perceive that something is off. Jesus interacts well with people of all ages, backgrounds, and walks of life. He has healthy friendships with men and women, and he has particularly strong and close friendships with the twelve apostles. If Jesus were crazy or mentally unbalanced, the apostles would never have stayed three years at his side.

Jesus backed up his spectacular claim with miracles.

If he were not actually divine, then his attempts at performing miracles would have failed. When he commanded the wind and the waves to be silent, the deadly storm would have continued unabated. (Mark 4:39) When Jesus told the paralyzed man to rise and walk, the crowd would have seen the man struggle unsuccessfully to stand. (Mark 2:11) But this is not what happens. Jesus calms the storm and restores health to the paralytic, along with countless other miracles. A delusional person cannot do such things.

Jesus cannot be dismissed as a lunatic.

As one reads the Gospels, one does not find reasons to conclude that Jesus was delusional or insane. It is quite the opposite: one gets the impression that Jesus was one of the most well-balanced and mentally healthy individuals one could ever hope to meet. 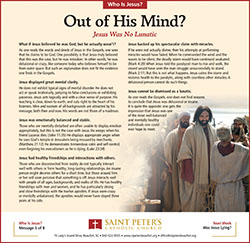